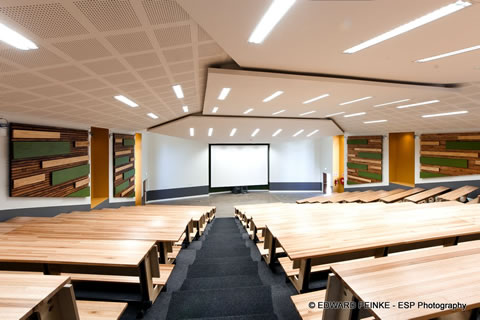 Raw’s lecture hall seating system has found another home at the new School of Agriculture building at the historical University of Fort Hare in Alice, Eastern Cape. Designed by Edward Peinke from Ngonyama Okpanum & Associates it reflects a crisp modern interior to match the exterior, with eco features such as innovative natural ventilation and intelligent lighting systems. Our seating system was specked early on in the project for its simple ruggedness, quick installation turnaround times, modern look and green credentials. This is one cool building on a tight budget for a modern School of Agriculture.

Excerpt from an article by Edward Peinke.

The University of Fort Hare in Alice required a new auditorium primarily for its expanding School of Agriculture, but also to serve as a fully connected video conference facility for other events.

The entrance to the building was defined by a block that facilitates movement in all directions, primarily from the main pedestrian walkway running past the building’s façade, while also connecting from the first level bridge of the existing building and accessibility ramp. Internally this node facilitates movement up to the foyer area and to the ablutions below. The auditorium space features tall windows with blinds that face southward to allow natural diffused light into the space and is supplemented by energy efficient lighting that can be controlled according to the required use. Furthermore the acoustics and sightlines have been well considered, creating an intimate space that is able to accommodate as many as 350 students or up to 400 if need be on a flexible, robust and sustainable seating system designed by Raw Studios. World-class technology has been incorporated into the building, including fingerprint readers, wireless internet, interactive smart boards and video conferencing facilities.

Rather than forcing a disposition upon the project, the design was allowed to evolve from its context, requirements and collaborations. The result is a building that subtly, but clearly communicates its intentions, while relating appropriately to its surroundings.

In conjunction with the brilliant design team at EarthWorld architects and Jacques Coetzer, artist and illustrator extraordinaire, Raw played an important role in the realization of TriBeCa Campus, a new restaurant coffee shop on the Tuks Campus in Pretoria. Tribeca Coffee Company is a long-standing client of Raw, and once again we were the go-to people for the shop fitting joinery and loose furniture fittings at this new student hotspot. Printing the artwork straight onto the birch plywood really created an effect that optimizes the “retro” look and “holiday” feel of their brand. Since its opening three weeks ago, the place has been packed to capacity and the stream of punters doesn’t seem to be letting up. Tribeca’s ethos of quality products and attention to detail (even if that does cost more initially) certainly makes economic sense in the long run.

We pride ourselves on being an environmentally responsible company and this is evident in our approach to design, raw materials procurement and manufacturing processes. However, since the Green Building Council South African does not test, review or certify products or materials, we have decided to compile a fact sheet to help prospective users to ascertain for themselves our commitment to sustainable business practices.